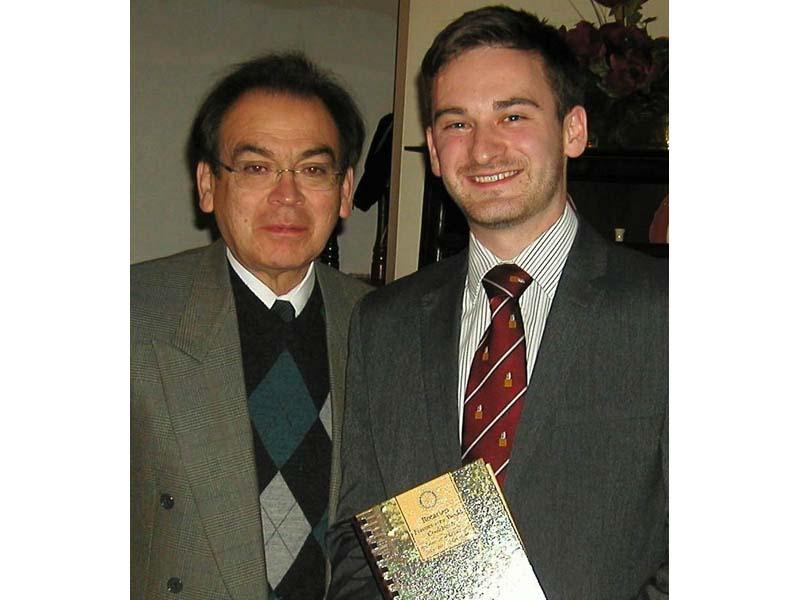 Thames Valley District is extremely fortunate in attracting exceptionally high quality scholars to its programme for ‘Outgoing Scholars’. Will Todman, a First Class Honours graduate from Oxford University and one of two Rotary Scholars from this District to be studying at an overseas university in the academic year 2014/15, is a shining example. A keen interest in current affairs at school led Will to study Arabic, before the outbreak of the Arab Spring, and it is quite astonishing what he has packed into his young life already.

While studying Arabic and Hebrew at Oxford, Will became interested in the wider humanitarian aspects of the Middle East and in particular conflict resolution and the plight of refugees. He has travelled widely in the Middle East and has volunteered in refugee camps in Lebanon and the West Bank, and in an orphanage in Morocco. Through work experience with both the BBC and ITN and three months with the British Embassy in Beiurut, Will gained great insight into the politics of the region from the perspective of international government and the media.

With an ambition to work in international government, (for example the UN), as an expert and adviser on Middle East policy, applying for a Masters of Arts in Arab Studies was a logical move. Will has a strong career interest in conflict resolution, so the masters course at Georgetown, with its added certificate in refugee and humanitarian emergencies,  seemed “the perfect platform”. He saw “the fact that the university is in Washington DC as an extra bonus as it provides access to many internship opportunities of organisations, think tanks and embassies that are located within the city”.

There was little time between finishing his degree at Oxford and packing his bags for Washington, but he managed to fit in work with Chatham House concerning Syrian refugees, time with his family in Warwickshire and a most welcome visit to his mentor and supporting club in Bicester. With such strong linguistic skills and valuable work experience, (not to mention boundless energy), it comes as no surprise that he was quickly in great demand in Washington!

Shortly after his ‘orientation’, Will was translating secret ISIS documents for a Sunday Times journalist, working for a consultant in the office of the UN’s Special Envoy to Syria and being appointed as a research assistant for Professor Rochelle Davis who is both the head of his programme and a specialist in refugees in the Middle East.

He spent much of December 2014 interviewing Syrian and Iraqi refugees in Jordan.

In February 2015, Will wrote to his mentor in Bicester  “As a summary, I’m taking some challenging but fascinating classes this semester, including one that focuses on refugees in the Arab World, and another than is teaching me a mixture of quantitative and qualitative research methods in conflict resolution. I am also working as a research assistant for one of my professors, and that is involving translating over a hundred interviews that we collected in Jordan just before Christmas. And finally, I am doing research for an advisor to the UN’s envoy which has involved me having meetings in the State Department and with the former US Ambassador to Syria.”