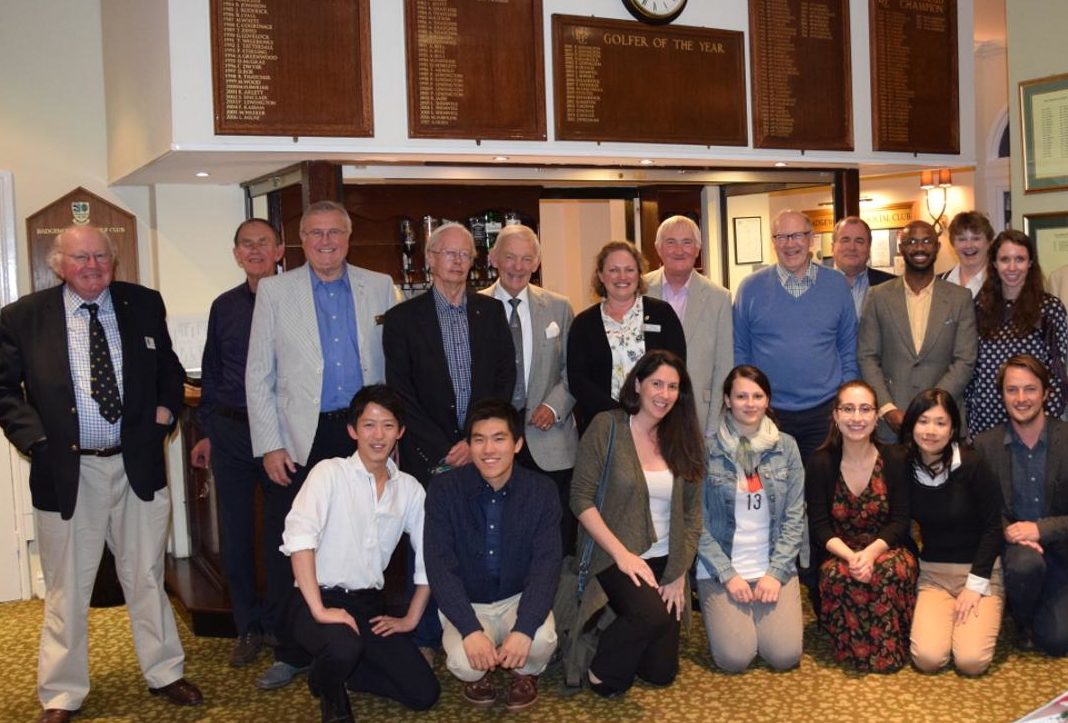 We said farewell to our visiting Rotary Scholars at a barbeque on 16th June 2016 at Badgemore Golf Club.

We have been lucky enough to host sixteen graduate students across our district in 2015/16, mostly studying in Oxford but also in High Wycombe. While some were still revising for exams, finalising their theses or already away on fieldtrips, nine of the students were able to join Rotarians from their host clubs to tell us a little about their studies over the last year and their plans for what they will do next.

It was great to hear the enthusiasm with which they spoke about the courses, their fieldwork, how their views have changed based on their recent learning and how their new knowledge is helping to shape their careers.

Rotary Scholarships are funded by Rotary Foundation Global Grants and so need to fit within one or more of Rotary Foundation’s six Areas of Focus. This means that our scholars are really planning to make a difference in the world working in areas to support the humanitarian objectives of the Rotary Foundation, whether in policy, further education, with NGOs or with charities.

Here’s just a taster of what we heard:

Andrew Berkley has been studying in the Oxford Internet Institute. His focus has been on Big Data and how giving people in low income countries accessibility to technology can help them economically. He gave an example of how technology given to men in a community might result in a 30% increase in prosperity while technology given to women in the same community might result in a 60% increase in prosperity.  Andrew said that coming to Oxford had helped him to open his mind, working with and hearing from other scholars in this field. In the future Andrew hopes to join the non-profit sector in an organisation such as an NGO or think tank, working for humanitarian purposes.

Takashi Usami has been studying Humanitarian Aid for Refugees at Oxford Brookes University. He told us how he came here hoping to learn what projects are really useful for refugees, however he has learnt that not much is really useful and that it’s a messy world that we live in. Takashi went to Serbia, Macedonia and Kosovo in December where he helped at refugee centres on the borders, handing out food and clothes to Iraqi and Syrian refugees. Having had that experience, he decided that he would rather work on the government side of this field rather than in an NGO on the ground. He told us that he had been back in Japan the previous week and had secured a job with the Japanese equivalent to the UK’s DFID Department of International Development.

Valerie King has been studying on the Criminology and Criminal Justice Masters course at the University of Oxford. She told us that she has seen how interdisciplinary scholars can come together to try to solve some of our worst problems. She has learnt how we ask questions about what makes us more peaceful and less peaceful, and what academics, researchers and policy makers can do to come up with some solutions.  We heard that next she will be going to the University of California-Irvine to study for a PhD in Law and that she then plans to work in legal research and policy, and that she believes by then that she will then have the tools and skills to make a difference.
Valerie has taken part in events with her host club, the Rotary Club of Oxford, including a seniors’ day, a fundraising dinner and a fun run. She has enjoyed learning about the amazing things that Rotarians are doing.

Sandra Wismayer was studying Cognitive Behavioural Therapy & Psychotherapy at Bucks New University in High Wycombe. She told us that chose to do this course because she wanted to be a better mental health practitioner. She has worked in large open immigration centres in Malta, that might accommodate  400 – 500 sub-saharan Africans, many of whom had experienced trauma, seen death, and left their families. Sandra told us how she felt helpless and unable to help them with her undergraduate degree and 10 years of experience in mental health. The course has given her skills on how to work in evidence-based counselling which has been shown to work with people who have post-traumatic stress. Sandra explained that cognitive behavioural therapy is very big in the UK and so she might work for one more year in the UK, in psychotherapy with refugees or with others, to consolidate her skills before returning to Malta. She has learnt a lot more about mental health and is now more confident and competent in how she can help people.

Kelly Casey and Joana Clemens are both on the MPhil in Development Studies at Oxford University, Kelly in the first year and Joana in the second and final year.  The course includes fieldwork in the summer after the first year and so we heard about the two visits. Joana spent three months in Mozambique, interviewing women who have faced conflict within their families whether domestic abuse or land disputes. Joana was interested in legal systems, since there are powerful informal legal structures alongside the standard systems such as the police and courts. There can be quite discriminatory practices, but women often choose to use the informal local systems.  Joana is interested in how women’s rights can be improved and told us that the focus of previous research and reform in this field has normally been on the state law & systems, but that this can miss what’s happening on the ground. Joana is going to spend two more years in Oxford, studying law, since she realises that to work in this field she needs more of a foundation in law itself.

Kelly told us that she had previously worked in Nepal and so was looking forward to going back there for her fieldwork this summer. Her area of research is human trafficking and she explained that the NGOs working with Nepali girls who have been victims of trafficking are generally unable to stretch their resources to focus on prevention. Kelly plans to work with the NGOs, and in their rehabilitation centres, researching prevention programmes. Kelly noted that many Rotarians in our district are interested in Nepal and are aware of the earthquake there, and she noted how natural disasters can increase vulnerabilities and so increase trafficking.

Mark Brown and Mariko Nakayama both studied at the Said Business School at the University of Oxford. Both chose this school because of its focus on social entrepreneurship and social impact and the opportunity to discuss business solutions to some of the world’s most important problems. Both had an incredible experience, studying some of the most cutting edge courses such as in social finance, collaborative economy, as well as getting involved in hands on impact investing work.

Mark told us that he had previously worked in Ghana, where he set up an impact investing company at the intersection between investment and charities and that his interest was in the gap in credit for entrepreneurs between micro credit and the more conventional investment credit. Mariko was previously at JICA, the Japan International Cooperation Agency (where Takashi is heading next) and worked in the area of seeing how technology developed by private businesses can be applied to social problems being addressed by JICA. As Mariko explained, this can sound easy in theory but it’s not, it’s really hard, so she was interested in learning how this can be done efficiently and effectively.

Mark told us how both he and Mariko had attended the Skoll World Forum at the Business School this Spring, one of the premier events in the world for those working on new bold solutions to some of the world’s biggest problems related to issues such as poverty and climate change. We also heard about the opportunities taken by Mark and Mariko to get involved in investing competitions, working with the Oxford Seed Fund and with innovative start ups.
What next? Mariko is going to work with an impact investor in Pakistan that works with healthcare, education & agricultural businesses. Mark has a job offer from a solar financing company that is looking to expand into agriculture, and also has an interview with the innovative finance dept at the Rockerfeller Foundation, so his options are still open.

Ikuya Aizawa has been studying Language Education at Oxford University. He told us that his interest is in the curriculum in schools, and in particular in language development and the academic challenges of immigrant children. This has grown from his personal experience of being born and raised in Taiwan then moved to Japan when he was 10yrs old. Ikuya worked for Panasonic after leaving university, and this was when he first visited developing countries and saw children not in school and begging for money, which he found it very difficult to accept. So, he left Panasonic to study Education from the language perspective. Ikuya told us that he has enjoyed being able to talk with immigrant children this year for his research, and he has been accepted onto the DPhil programme in Education in Oxford and so will be staying with us for a few more years. Ikuya praised the Rotary Foundation scholarship programme and noted how he is pleased that he will still be able to have a connection with Rotary on return to his home country.

Tim was thanked by Valerie on behalf of all those present for his management of the programme this year, and particularly for organising the farewell barbeque. Ikuya also thanked Tim, as his host counsellor, for driving him to Rotary events and for making sure that there is also enough food at the event!