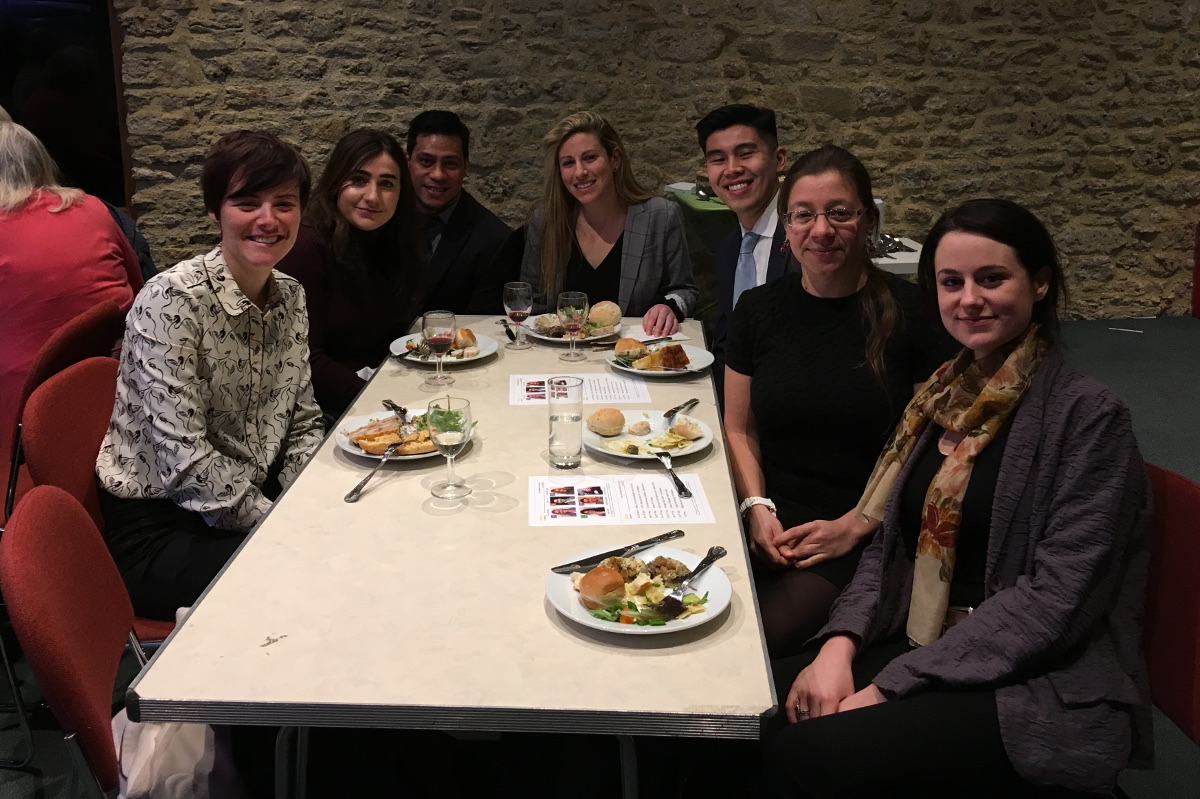 The Rotary Clubs in Abingdon, led by Abingdon Riverside Club, organised a lovely evening on 2nd February, at which six of our current Rotary Scholars were invited to speak to a room of Rotarians and friends from eight local clubs. Richard led the proceedings for the evening, we all enjoyed a lovely buffet and a few drinks, and we heard a wide range of stories from the Scholars.

Bernie is studying Migration Studies in Oxford. He and his family live in New Zealand, but he was born in Fiji, grew up on the islands of Kiribati and Tuvalu in Micronesia, moved to New Zealand at the age of 13 and then studied in Japan and played rugby in many places. He previously worked at the New Zealand Office of Foreign Affairs and his current interest in migration links to the threats of climate change to islands in the Pacific, some of which are just 4m above sea level. He is particularly proud to have played in the Oxford-Cambridge rugby match just before Christmas – which Oxford won.

Emily is from the USA but her time in Morocco fuelled her interest in the Middle East and in working in the field of international development and security. She has worked for the crisis response team at the UN Development Programme in Jordan, and her current interests focus on whether gender plays a role in the prosecution of terror-related crimes. She described her two-year MPhil in International Relations as learning how to do research in year one and then doing the research in year two.

Jessica is from rural Georgia and studied at Princeton before coming to Oxford to study for an MPhil in political theory. Her interests lie in behavioural health policies and the social determinants of health. We heard about America’s opioid epidemic and that views on where the responsibility lies are changing.

Emilia has just returned from 12 months of fieldwork in her home country of Mexico. She is studying for a PhD in Development Studies and is interested in the effect of business in Mexico on migration of workers from rural areas to the bigger centres. She spoke about people working 48 hour weeks but still living below the poverty line. We also heard how her interest in community projects grew from her grandparents’ support of such initiatives. As she participated in literacy programmes and water projects she learnt how to listen to the local beneficiaries of such projects, and her interest developed further.

Nicole lives in the USA but has worked and travelled in central Asian countries. She has worked for the State Department and for CNN and noted how different Oxford is from previous experiences. She is interested in facilitating dialogue between the USA and Russia.

Kevin is from the USA where his family moved from Vietnam after the war there. In his third grade he moved to a new school with many more opportunities and he was the first in his family to attend university. He is passionate about education equity, has taught English and maths in Vietnam and plans to move into education policy with an organisation such as the UN.