This article first appeared in ForeignPolicy.com in October 2013.

Managing Afghanistan’s nascent industrial base will be critical as the nation attempts to build a modern economy that is increasingly less dependent on foreign aid. Today, there is great room for optimism as Afghanistan moves toward the post-transition period. Despite having a GDP that was made up almost entirely of outside aid in 2011 and 2012, certain industries — including the Afghan telecommunications, agricultural, and mining sectors — have begun to demonstrate remarkable growth and potential, leading to the vital stability needed for a viable, diversified marketplace.

Experts estimate that Afghanistan holds deposits of $1 trillion to $3 trillion of oil, gas, gold, copper, iron ore, and other natural resources. Of this subset, perhaps the most intriguing is the country’s marble industry, which is further along in its exploitation than other areas, and whose emergence is an instructive success story on seeding enterprise in the war zone. As commodity cycles turn, prices increase, and large-scale resource extraction projects scale up, Afghanistan is focusing on the industry as an anchor for the development of its resource corridor. According to the Afghanistan Investment and Support Agency, the Afghan marble industry has expanded by 60 percent since 2008, a growth that has positives effects on other industries as well.

Economic considerations aside, Afghanistan’s post-2014 future will be heavily tied to its security situation. In geostrategic hot spots around the world, counterinsurgency experts have long argued that adequate development and economic prosperity follow security. But if there is a successful strategy that upends this conventional wisdom, it may lie in western Afghanistan, where the development of the nation’s multi-billion dollar mining industry is growing the economy and consequently forcing improvements in the security sector. In essence, as businesses have begun to flourish, despite the lack of fully settled security, Afghans have moved swiftly against nefarious actors to ensure that they do not impact the flow of marble and revenue generation.

Ultimately, an economy is built out through trade, not aid, as growth and new jobs are the most sustainable way to raise living standards. With increasing exports across Europe and Asia, the Afghan marble sector already earns at least $15 million per year and remains the top marble producer in the region. If present maturation trends hold, the marble sector could generate nearly $700 million in exports by 2018.

Over the last five years, other sectors have also demonstrated robust growth: the Afghan media, health, and agriculture sectors (dry fruits and seeds, which surpassed carpets as Afghanistan’s primary export) have all shown impressive development. However, these areas rely to a significant extent on the funds available from foreign aid, and subsequently have not generated sizable, sustainable profits that maximize the sectors’ full potential. Conversely, certain large-scale mining activities have turned a profit relatively quickly and have continued to expand at a dynamic rate, especially as innovative Afghan companies increasingly access a burgeoning global market for the nation’s rare, world-class materials.

Since 2008, Afghans have sharply focused on the country’s export capacity to meet the rise in international demand for high-end stone. Since its introduction to the global market, Afghan white stone, a marble noted for its unusually rich quality and rainbow color, has been actively sought by some of the world’s wealthiest buyers — industry insiders — who are engaged in a continuous price war for the most expensive marble products. By increasing its share in this highly competitive market, Afghanistan is already carving out broader regional economic relevance, with the World Bank concluding that “in a scenario with higher investment in mining development, growth could increase to 6.9 per cent on average until 2025, and fiscal revenues could reach 2-4 percent of GDP  in the early 2020s, depending on the number and scale of the exploited mines and the pace of their development.” The potential earnings from the mining trade are therefore poised to become an important source of fiscal revenue, as well as a vehicle for creating jobs, developing infrastructure, and ensuring national economic growth. The key remains strategic management and investment. 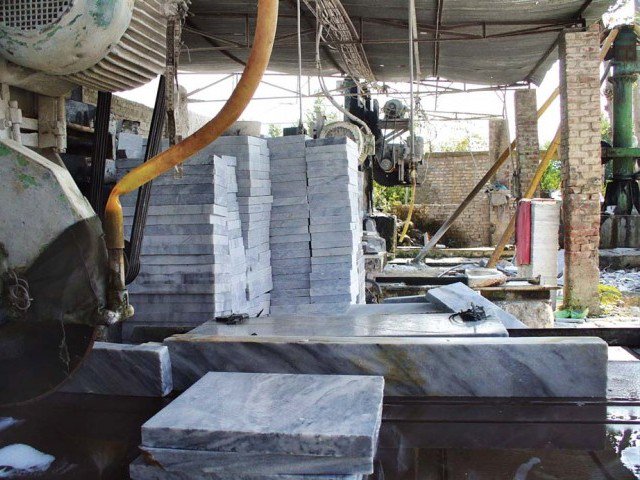 The largest marble producer in Afghanistan, Equality Capital Management (ECM), founded in 2006 by Nasim and Adam Doost, has implemented a successful framework for foreign direct investment and economic growth. In Herat province, located in western Afghanistan, ECM has secured multi-million dollar commitments from leading international firms by offering an exclusive right to its top-grade marble, in exchange for modern production machinery, mining refinement technology, and technical support from geology and engineering experts. As a result of this business model and efficient management, ECM has helped bring the Afghan mining sector in line with international standards, while also using public-private partnerships to improve infrastructure, power reliability, and access to deepwater ports that are crucial to making the industry competitive.

The effects of these improvements have been clear. Since ECM’s introduction of Afghan marble to some of the world’s top stone importers in 2008, it has become a highly sought commodity — a global-luxury good competing with Carrara marble, an Italian stone generally recognized as one of the finest in the world. Consequently, ECM’s current portfolio boasts foreign buyers from a vast lineup of nations, including China, India, Italy, Indonesia, Russia, Saudi Arabia, Turkey, Turkmenistan, and the United Arab Emirates, among others. Afghan stone is increasingly used in prestigious construction projects across the world, such as the building of China’s St. Regis Shenzhen, a premier five-star international hotel, and in the new headquarters of Margraf Industria Marmi Vicentini, a century-old firm and the fourth largest marble exporter in the world with ties to some of the world’s most distinguished architecture.

Because not all foreign companies are keen to enter an unproven market in a war zone, Afghan leadership in cultivating joint ventures to share risks and costs in regions fraught with danger has been critical to the industry’s growth. The combination of security operations and economic growth sprouting from these marble-for-security deals, in which Afghan business owners provide marble to the Afghan government in exchange for hard security guarantees, has created challenges for the insurgency. Pursuing this course, “the Afghan National Army has taken the lead and a more active approach to secur[ing] the marble mines, checkpoints, and transit routes over the last six months,” notes a senior U.S. military official of Regional Command West. As a result of such deals, in order to guard the industry’s growth, the Ministry of Interior and the Afghan National Security Forces have become more responsive, reinstating the flow of commerce hindered by illicit activity and constraining the insurgency in key zones.

Given the improved security, the growth of the marble industry has created an impressive spillover effect. As noted by Mansour Rahimi, the head of the Herat Marble Union, the number of Afghan-run small-to-medium-size marble enterprises in Herat province alone has increased from four to over 40, and the number of quarries contracted with the government has grown from two to 12, a rate that Adam Doost predicts “will generate 40,000 jobs …over the next five years in this region.” In fact, many of the relatively smaller businesses working beside ECM recently established the Marble Union to help capitalize on opportunities and solve challenges facing the industry due to this growth. 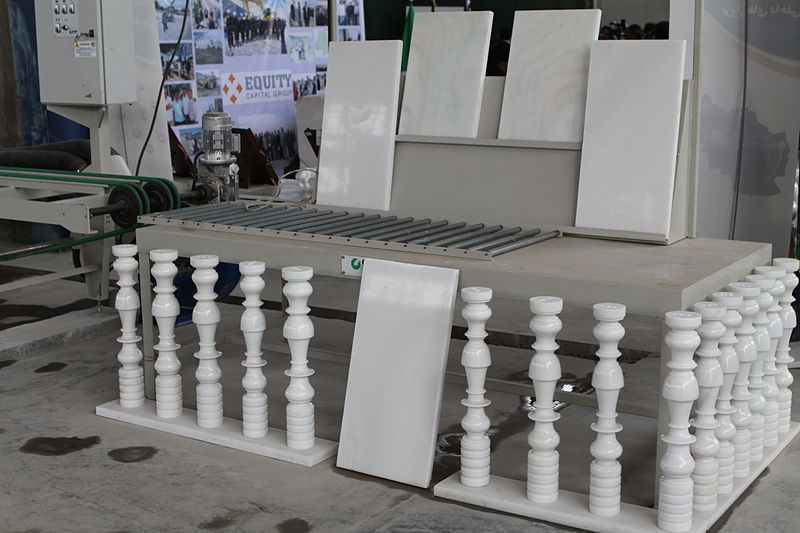 The size and sophistication of the mining industry, and the direct work of Afghans themselves as owners, have made the Herat marble industry a model for Afghan businesses in other regions and industries, such as barite, gold, limestone, lithium, tin, and even oil and gas.  Acknowledging this influence, a group of Lashkar Gah onyx dealers from Helmand province in southern Afghanistan recently toured several Herat manufacturing facilities and met with the Doost brothers and Marble Union leaders to learn from their successes. The timing of these study tours is crucial, as the Helmand business leaders are currently introducing their highly prized onyx to the global market for the first time. Afghans’ direct participation in these industries is absolutely essential for long-lasting economic growth and stabilization in the region.

Despite this success, fundamental obstacles to developing the mining sector remain. Procuring stable investment and credit facilities for businesses, repairing and updating antiquated technology and infrastructure, and improving the structure and application of mining laws all remain significant challenges. To be sure, no “one-size-fits-all” solution can guide business development and the next generation of entrepreneurs who are leading the way in mining and other growth enterprises in Afghanistan. Businesses throughout the nation need more robust trade opportunities and strong partnerships with foreign investors, since the marble sector is capital intensive and driven by a technological skill base, one which is still in its relative infancy in Afghanistan. Nonetheless, drawing on the Afghan marble industry leaders’ blueprint for facilitating foreign direct investment and modern technology has already provided practical steps for up-and-coming Afghan business leaders to take as they seek to achieve transformative results.

In essence, understanding why the marble-for-security model works is especially relevant to the economics implicit in counterinsurgency operations across Afghanistan and other strategic zones. Actively seeking ways to identify, study, and apply the lessons learned from the reality of the war zone — specifically how economics are incentivizing Afghan leaders to turn against the insurgency and drive hard security and stability guarantees — can effectively help improve growth and stabilization successes across multiple industries throughout Afghanistan for decades to come.

Melissa L. Skorka is a Counterinsurgency Advisor for the Commanding General’s Advisory and Assistance Team in Afghanistan.